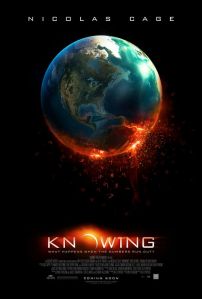 It’s always a little unsettling to have a run in with the numinous.  It’s something more than mere coincidence; it’s an experience that evokes awe, even dread.  It makes you feel like you’re playing a role in someone else’s clever machinations.

Determinism and randomness find themselves at the center of Alex Proyas’ Knowing.  John Koestler (Nicolas Cage) is a professor at MIT.  He doesn’t believe in any kind of grand purpose.  He may have in the past, but he’s done with that now.  But his whole idea of reality is affected when his son brings home a piece of paper from school, a relic buried in a time capsule for fifty years.  It’s a page filled front and back full of numbers that accurately determine the dates of a string of major disasters from the last five decades, and predicts three more.

Like Roger Ebert notes, there’s nothing here we haven’t really seen before, we just haven’t seen it put together quite like this.  Prophetic doomsday stories like to follow a particular rhythm, but Knowing isn’t interested in riding the same old rails.  It’s a very self-aware piece of storytelling.  Every major religion has it’s own take on how the world will end, and the film doesn’t have any trouble brushing all that aside.  It seems more intent to tweak preconceptions than to try and spell anything out.  More than anything, it’s a parable.  It’s not just about prophecy in general, but the burden of the prophet.  It’s about sifting meaning from meaninglessness.  It’s about fathers and sons.  It’s about partnership with determinism rather than participation.

There’s an idea.  Partnership with determinism suggests a paradox.  If it’s my choice or idea to do something (assuming no other “force” were influencing things), how can it be part of someone else’s grander plan?  If someone or something else is really influencing my choices, is my will really free?  Here’s a better head-scratcher: what if it’s both?

That’s where the film seems to land. Koestler never sheds his free will.  He makes all of his own choices, and every choice he makes, every action he takes, plants him right where he’s supposed to be, right when he’s supposed to be there.  The movie never really acknowledges the paradox, and lesser filmmakers might have called more attention to it.  Instead, Proyas just lets the drama play, and he spins a crackling tale.

Proyas manages an unenviable balancing act with great success, juggling the more human and emotional elements with grand, harrowing set pieces.  He anchors everything in grim reality, making the supernatural much more palatable when it arrives.  Everything rides on a sense of seriousness and urgency, which Cage’s sad-sack struggling only helps to sell while Rose Byrne’s increasing anxiety and terror seals the deal.  Marco Beltrami’s score adds to the growing ethereal tension, pinning you to your seat and daring you to look away.

Because of the film’s intent to play with preconceptions, it carries more than a few surprises, some of which may offend, annoy or delight.  That’s just the way some parables are.  At it’s heart, it’s a story that provokes in every good way.  No one wants to work when they sit down to watch a movie, but Knowing asks you to work a few things out, and does it in a way that makes it feel more like play.