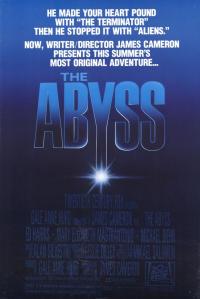 (Quick note: this essay refers to the special edition release, which restores about 25 minutes of film to the original theatrical version.  It also discusses certain vital plot points at length, so read with caution.)

James Cameron’s fourth feature film is a difficult one to classify.  Part love story, part disaster movie, part science fiction treatise, The Abyss channels the director’s considerable skill into a story that offers much more than white-knuckle thrills.  It manages to examine human depravity without resorting to nihilism, and suggests that love really does cover a multitude of sins.

Deep in the ocean, ballistic missile submarine USS Montana encounters a foreign object.  In the chaos, it strikes the wall of an abyssal trench, and sinks.  Its depth means a typical rescue operation is out of the question.  Instead, the Navy enlists the help of a crew of deep sea oil drillers whose movable drilling platform has the ability to reach the site, and provide a base of operations for the rescue team.

Bud Brigman runs a loosely disciplined staff of hard working blue-collar roughnecks.   The lives of his crew are paramount.  He doesn’t care that the company offers them all triple pay to cover the risk.  “When it comes to safety of these people,” he says, “there’s me and then there’s God.”  Nice bit of clever foreshadowing there.  We’ll get to that later.

Complicating matters is his ex-wife Lindsey.  She just happened to design the drilling rig, and insists on joining the crew to make sure her baby isn’t abused by her reckless ex-husband, or the Marines coming down to run the show.

The inherent tensions of the mission, and the people involved, are compounded by the claustrophobia of the rig.  Pipes and valves line tightly packed corridors.  It’s a dangerous place, and now it’s home to a dangerous man.  John Coffey has one thing on his mind: the recovery of the launch codes that keep the nuclear warheads safely tucked away in the sunken sub.  He knows there won’t be any survivors just as well as he knows someone sunk the boat.  That someone could still be in the area, and that someone could be a Russian bogey.  All his concerns are justified, but once Coffey steps onto the rig, it’s clear he’s unstable.  He exhibits the symptoms of pressure nervous sickness almost immediately.

It’s a wild ride after things start to go awry, and it’s never just one thing.  A hurricane looms over the surface where the Explorer—the ship tethered to the rig, supplying power and communications—waits for the crew to finish the job.  The creatures that live far below in the further depths of the sea drop by for a quick visit.  They are only seen by two, and the experience incapacitates one of them.  Lindsey is the other, and her account convinces Coffey that the Russians are nearby.

The hurricane blows in and all hell breaks loose.  The rig is cut off, and some of the crew is killed.  In the meantime, close encounters persist.  The creatures below drop in for another visit, curious of these humans who dare to venture this deep.  They arouse wonder in some, but fear in others, mainly Coffey.

In an effort to secure the sunken sub, Coffey has gone back and returned with a nuclear warhead.  Cut off from his chain of command, he intends to use it if those dirty Russians come back.  No one is able to convince him that there’s more going on here than the petty conflicts of two opposing nations.  There’s something very special at work, something beautiful.  Coffey just wants to blow it up.  In his increasing paranoid madness, he doesn’t even care that his actions will kill him and the others.

On one hand, it’s an adventure that plays belief against unbelief.  Belief leads to courage.  Unbelief leads to implosion.  Coffey’s arc is tragic, even if it isn’t sympathetic.  He doesn’t see anything out there bigger than himself—after all, he’s the one with his thumb poised over the trigger of a nuclear bomb.  His refusal to believe leaves him isolated and alone, lost at the bottom of the sea, until the sea claims his life.

Bud Brigman leads us into the film’s other hand.  Once the dust settles and Coffey is dispatched, there’s still the matter of the bomb Coffey set loose to kill the creatures.  If it blows, the creatures die and so does the crew.  Brigman alone faces the danger of descending into the trench to diffuse the bomb.  There’s not enough oxygen for him make it back.  He knows this before he leaves, and keeps the news to himself until the others figure it out.  Bud alone descends to the bottom of the abyss where a single emissary arrives to take him further down to meet the NTIs.  There, they reveal their plans to overthrow the world.

Bud’s reaction to the horror prompts the only logical question.  Why are you doing this?  They brought him down here, after all.  They’re the ones who decided to show him their plans.  It gives him the right to ask.

Behind him on the wall, the NTIs project image after image of nuclear detonations.  The tensions between Russia and the United States have finally come to a head.  Both sides make accusations that only invite greater, more irrational feelings of contempt.  Russia wasn’t responsible for sinking the Montana, but how is the United States supposed to know that?  The lingering suspicion both sides have for each other finally threatens to erupt into one last assault that neither side will survive.  The NTIs know it’s coming. It’s only a matter of time.

Bud asks: How do you know they’re really gonna do it?  Where do you get off passing judgment on us?  You can’t be sure.

It’s a plea more than it is an indictment.  He’s standing before beings that have already proven their power.  Bud mounts the only defense he knows: you can’t be sure. How do you know they’re really gonna do it?

The NTIs know because they’ve been watching us for a long time.  Humanity has often tried to destroy itself.  The film walks the line at the edge of embracing nihilism as the NTIs replay for Bud the vast recurring evil mankind has continued to sow and reap.  It’s a tragic moment because we know it’s true.

At this point, for the first time in film, we’re given a peek at the rest of the world as the waters rise and the people run for their lives.  But just as the enormous wave reaches its epoch, it stops.  A great wall of water stands before the people of the earth who can do nothing but look upon the wonder and the horror of it all.

Then, without any explanation, the water begins to recede.  The oceans level, and the people cheer.

You could have done it, Bud says. Why didn’t you?

Bud doesn’t know it yet, but he’s already offered humanity’s best defense.  Throughout the film he’s had to confront his conflicting feelings for Lindsey.  Their divorce isn’t final; he even refuses to quit wearing his ring.  She’s driven, opinionated, and she’s willing to run over anyone who gets in her way, including him.  But he still loves her, and he’s willing to give his life for her.  In no way is this better illustrated when the two of them are trapped together in a damaged submersible.

He has diving gear, she does not.  As the interior fills with water, he offers his breathing apparatus to her, but she refuses.  Her plan is incredibly audacious—she will drown in the hope that Bud can drag her back inside the rig in time to resuscitate her.  The plan works, but not before it appears Lindsey has died.  Bud pounds on her chest, willing her back to life.  “You never backed away from anything in your life, now fight!”  He was already willing to give his life for her.  Instead, she gave his life for him.

With the remaining threat of the bomb, it was his turn.  Now, here at edge of the abyss, he confronts the hand of a power ready and willing to end all life on the earth.  His life stands in the gap of all humanity, like Moses beseeching God.  The NTIs monitor all human communication, so they pick up on the messages Bud sends to his wife on his way down.  They replay those very words for Bud in response to his question.

His willingness to lay down his life affects the NTIs enough to end their assault.

The Abyss isn’t perfect.  As an example of world-building, it does a satisfying job at first glance.  Dig a little deeper, and, well, things look a little more muddled.  It doesn’t work as an allegory at all, but equating the NTIs with God certainly makes for some interesting conclusions about their behavior.  Their intent in passing so close to the Montana is never revealed.  Was that first object just swimming by for a look?  Was it merely on its way home (as Orson Scott Card’s novel of the film suggests)?  We know they don’t trust humanity to wield the awesome power it’s come to possess.  Perhaps their pass by the Montana was the closest thing to violence they were able to perpetrate—a first strike, if you will.  If that’s the case, then you have to wonder: did they know how far things would escalate?  They watch our TV, they knew what that sub was carrying.  What did they think was going to happen?

The real motive behind the inciting incident has to remain vague, at least from the point of view of the Montana’s crew.  Maybe it is what it looks like—an accident.  No one outside of the audience really knows what sunk the sub, and that’s the point.  Cameron gives us an inciting incident that arouses curiosity and drives the plot.  It doesn’t need any further examination.  It’s a good thing, too.

The film follows some left-leaning tropes (military industrial complex = villains) that might annoy politically minded viewers, but that’s just the worldview of the storyteller projecting itself onto the story.  There’s more on the story’s mind than vilifying the military, even though it does get a little preachy.  For the most part, however, Cameron commits more to the story than the agenda.  The story may not hit all the right notes, but it hits the ones that matter.  It captures the awe and fear of the unexplained, and it reminds us that we only have two choices when we encounter the numinous: we can walk away, or we can lay down our lives.

Written and Directed by James Cameron