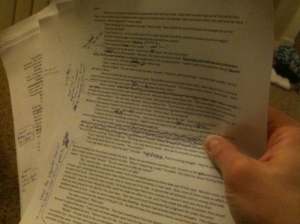 Splinters of Light began as a personal experiment. When I started this in 2012, I was in between projects. Freelance assignments had dried up and I needed something to prompt me to write on a regular basis.

It’s time to admit it: my powers of articulation and criticism haven’t grown as I once hoped they would.

Part of this is because I haven’t invested the necessary time. The critics I enjoy—whose opinions run counter to that old axiom “if the critics hate it, then I’m gonna love it!”—see hundreds of films a year. I’m lucky if I get to see more than 20. They’ve studied art across multiple mediums, studied film history and developed numerous powers of insight. Me, I’ve read a few books here and there. They are Olympians. I’ve tried swimming in their pool and I can’t keep up.

In the last year, however, freelance assignments have picked back up. I’m watching fewer films, but I’m reading more books.

And I’ve reacquainted myself with my first love: telling stories.

I started calling myself a writer when I was 12. I used to hand-write my stories on lined paper. I even tried creating my own comic books once I discovered spiral-bound sketch pads.

I loved the act of sub-creation. It’s a love affair that’s had its fits and starts over the last 10 years. The idea of being a novelist looks romantic and beautiful until you actually try to be one. Still, I published a short story in an obscure publication (so obscure I can’t even link to it) back in 2006. I wrote an actual 109,000-word novel in 2010. It’ll never see the light of day (at least, not in its current form), but the experience taught me many valuable lessons.

When you’re married with two kids and bills to pay, that lovely notion of retreating to a room to craft the next American masterpiece wilts like a dead rose. In its place grow thousands of weeds. They will choke you unless you mow them down. That, I’ve learned, is where the real work begins.

Earlier this year, I was approached to help out with a small writer’s forum as a mentor to young teenage writers. After looking at what was involved, I decided to dive in. Therefore, this site is transitioning to an extension of my new role as a mentor. It’ll still by my little effort to participate in the ongoing conversation about stories–how they’re told, and the splinters of light that point the way to the Great Story–just in a different way.

I may still post an occasional movie review, too.

There’s a lot of stuff that I wish I had known about this gig when I was 15 and 16. I’m eager to share what I’ve learned, and I’m eager to learn from them as well.